It’s possible my last post made me sound like an amazing parent who always sticks to her guns, never issues empty threats, and never goes back on what she says so her bipolar two-year-old will respond perfectly to every situation by age three.

I lie.  Or maybe I stretch the truth.  Or perhaps I’m simply implying I’m better than I actually am.  At the end of the day, a lie is a lie.  (Yes, even if it’s about the Elf on the Shelf, or Santa Claus, or that if your kid doesn’t eat green vegetables, his nose will turn green and his feet will turn purple.  That’s another lie I tell.)

Thursday is a great example of a time when I absolutely caved.  I had just dropped off my older two at school.  Let me digress a little by letting you in on the fact that Ethan is obsessed with lip balm.  In fact, recently after I told him he couldn’t have my lip balm, he took my secretary table where I keep the lip balm and flipped it up, spilling my full cup of coffee into all of my makeup.  But that’s another post. 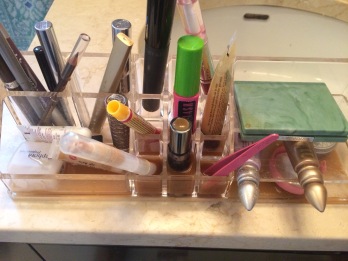 This is but a glimpse of the coffee mess.

So I was on my commute home from school drop off, and Ethan asked for my lip balm.  I said, “Maybe later.”  (I am really trying not to say “No” so much.)  Of course that was not an acceptable response, because two seconds later happened to be later.  So he asked again. “Another time,” I said.  Again, the question.  “I already answered you, Ethan.  I said later.”  Again.  “No, not right now.”  It was probably the sixth or seventh time that I said, “Okay, fine.  You can have it.”

This was that parenting moment.  That moment when you KNOW you are sending a mixed message.  When you know you shouldn’t say “No” and then give your child what he wants in the next second, but you’re just too darned drained and tired to keep bantering.  It’s also the moment when there is a high risk of things ending badly, but for the momentary relief you so badly want from the badgering (or noise, or sibling spats, or whatever the case may be), you cave.  You make what you said just moments earlier a lie.

About twenty minutes of peace and quiet later – which is precisely what I knew I was buying with my change of heart – I arrived at the gym.  When I opened his door to get Ethan out, there was no more lip balm left in the Eos container.  It was empty, and Ethan looked at me and said, “Mama, I need a napkin to wash my hands.”

No kidding!  His hands, seat belt, and jacket were so artistically smothered in berry lip balm. 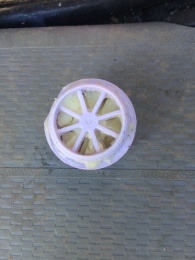 We simply can’t get it right all the time.  There is no perfect parent and it is impossible to be 100% consistent.  But also, it’s not necessarily inconsistency if our children are able to convince us to change our minds.  I actually think it’s important for my children to know that they do have negotiating and reasoning power with me, especially with my older two.

Sometimes Eliza and Zach convince me to change my mind about giving them a treat, or having longer to play, or, really anything.  And when they do, I get to share with them the reason I have changed my mind.  When they’ve made a great point (“But mom, I already finished my homework and we’re getting along so well!”), I can recognize it.

And when I’ve changed my mind for no explicable reason except that I’m buying some peace and quiet, I use it as an opportunity to explain grace to them.  I like connecting these dots for them.  I connect the idea that sometimes we get things – good things we want – for no reason at all, but simply because we exist and are loved.  I don’t believe that Ethan can grasp that yet, but I still tell him that’s what he’s getting.  My older two began asking me for grace when they were three or four, so it’s not far off.

For now, I need to remind myself that sometimes, giving in, or turning myself into a liar, is worth the 20-minute drive of quiet when I am able to string some cohesive thoughts together.  And cleaning up smeared lip balm is also worth it.  A lot of parenting is weighing the various options in the moment and picking that one that works best in that situation.  There’s hardly ever one, black-and-white, always the right response.  And THAT’s no lie.

One thought on “Parenting lesson #33: Everyone lies, especially parents”

FIND WHAT YOU NEED