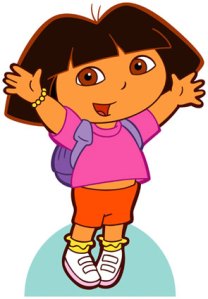 Last week, amid potty training and puke, I think Eliza watched each of the 7 DVR’d episodes we had of “Dora the Explorer” 2-3 times.  She sat latched to me like a lap parasite for hours on end in a Dora daze.  I wouldn’t normally allow such a thing, but during a 104.3 degree fever, she can do whatever she wants.  And besides, it dawned on me that when I was home sick as a kid, that’s pretty much all I did.

Now I’m trying to wean her from the experience, because she thinks she can still say, “watch Doda” (she has the Latin rolling her Rs thing down) and she’s going to endlessly sit in front of the tube mesmerized.  Obviously, I don’t want her to watch hours on end of television every day, but I must say that it is a wonderful time buyer sometimes.

I remember reading that the American Association of Pediatricians recommends that toddlers watch no more than 1-2 hours of television per day.  At the time, I was pregnant with Zach, and I laughed at the thought, saying to myself, “Who allows a toddler to watch even THAT much?  Eliza only watches about 20-40 minutes.”  Once Zach came along, I knew exactly what toddlers watch 1-2 hours a day.  Or more.  Those with siblings.  (Or fill in the blank because I completely understand now.)

In my perfect world, I entertain my children all day long with educational games, puzzles, and toys.  We run around and chase each other.  We sing songs.  Zach sits still (safely) somehow while Eliza obeys my every command so I can get things done like cooking and cleaning.

In my real world, I have to prioritize because there is no way to keep a clean house, nurse a baby, entertain a toddler, plan and make baby food and healthy meals, have clean clothes, run errands, and tend to others’ needs 24/7.  Something’s gotta give.  Right now, it’s television.

First thing in the morning, in order to be able to nurse Zach, pump extra milk, and make some breakfast for Eliza, I put on an episode of Dora.  I don’t know how else I could do it (though I am all ears for suggestions).  We generally watch another episode sometime before nap in the afternoon because I need to buy more time to get things done.  After nap, we often watch another episode, usually while I’m trying to make dinner.  And I must confess that some days, like today when it’s rainy and wet out, we’ve already watched four episodes.  (I know I promised not to mention it, but Eliza has spent the past day and a half regressing in her potty training.  She is not sleeping well, either, so having to pee and poop and holding it in endlessly is really causing problems.  We’re back to her clinging to my lap, begging for boots and Isa and Tico and Benny and all her Latin TV friends.)

Does this make me a bad parent?  I know I’m not the only one who wonders that.  Last week I was at a friend’s house and she turned on Yo Gabba Gabba and confessed that sometimes she sets her two in front of it to get some peace and quiet.  Then she said, “I know that’s bad.  Is that bad?”  It was like I could tell she thought I would never do such a thing, and I would judge her for doing it.  And I said, “No that’s not bad, I do it, too.”  She was so relieved.

Why is it that it’s so hard to feel like a good parent when you can’t keep the card house from falling without a little help?  No, I don’t propose letting television raise your children.  We do play games, sing songs, read books, and chase each other.  But the dishes have to get done somehow, too.  And the cooking.  And the cleaning.  And the laundry.  I’m curious to know from other moms how much they think is too much.  And I’d love some tips on other types of distractions for young children.  Because I, too, can only take so much “Dora Dora Dora the Explorer, DORA!”

One thought on “TV: My necessary evil”

FIND WHAT YOU NEED